Have just downloaded and installed the new build of nuitrack

When we try to run the nuitrack_c11_sample.exe example with the intel d435 sensor installed we receive the following error message:

The sensor is working correctly with the Intel Realsense viewer software.

Do we understand you correctly that you resolved this issue? Could you advise what was the reason for this problem?

No we still have ongoing issues with D435. There is some sort of bug it seems in the latest intel drivers and windows 10. There are a number of people in the intel forums with similar issues. Still waiting for a full response from Intel.

Basically, the INTEL driver for Firmware updater is not functional. When you attempt to update the D435 using the intel DFU it fails. The same issue exists in the intel windows universal driver on windows 10 since this driver installs a RS400 service that keeps on trying to update the firmware incorrectly … and every time it tries to automatically run the update it puts the sensor back into DFU mode - which shuts the camera down.

We are also still unable to get the d435 to connect at all with the latest 1.3.3 nuitrack build - it keeps reporting the error from the original post in this thread …

This is the error we are still seeing when running the default nuitrack_c11_sample.exe file … if we use the OrbBec sensor - everything works correctly as expected.

terminate called after throwing an instance of ‘tdv::nuitrack::ModuleNotInitializedException’
what(): Can’t configure DepthProviderManager

This a screen shot of the same sensor running using the Intel Realsense Viewer - which is working exactly as expected.

Would appreciate any assistance you may be able to offer in moving our testing forward. 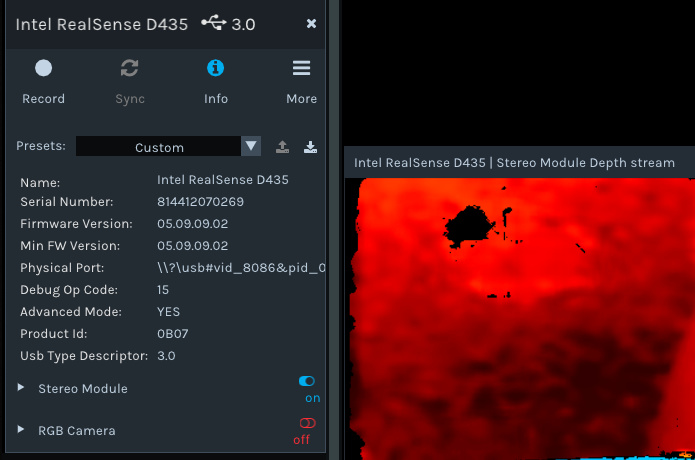 I just received my D435 last week and was looking forward to use it with NuiTrack. However, I encountered the same problem that you experienced. It’s fortunate for me to find your post, otherwise I would have been left in the dark here. Have you solved the problem somehow or are you still waiting for Intel to release a new update?

In terms of firmware updates - we have been back and forward with intel over the past weeks -we eventually managed to get the 435 to update to latest firmware correctly on a different machine with a usb 3.1 port and an older version of windows.

What we have further discovered is that the 435 usb connection is incredibly fussy - it winds the sensor back in terms of its capabilities depending on the quality of the usb connection – and even the cable type.

The INTEL VIEWER is capable of dealing with this perfectly - but the nuitrack implementation is seems very poor in this area.

If nuitrack wants to properly support the intel sensors - then it needs to do so with maybe more transparency.
We had no issues internally getting our 435 to connect with the intel sdk - regardless of what usb port it was connected to - or the type of usb cable used.

Thank you very much for your response, Westa. From your suggestion, I connected the device directly without an extension cable to a usb 3.1 and I was able to update it and got NuiTrack to work. Your assesment is spot on!

Hi all. I have the same problem with a D430 & D400 combination (also with a D410&D400 combination)–the PCB-only version of the cameras–under linux (Ubuntu 18.04).
Equally, realsense-viewer works perfectly but all NuiTrack examples fail. Attaching directly to a USB3.1 port with a good cable (3.1), however, does not do any difference.