I was following the instructions to activate Nuitrack on my Android device, but after pressing “Compatibility Test” the screen turned black and the test won’t complete.

Below is the screenshot before the test: (System time check: OK) 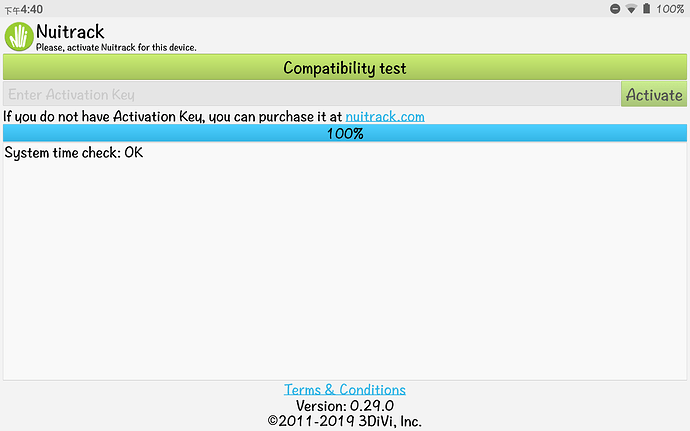 The app didn’t crash though, as I pressed the back button it went back to where the app got started, and the activation key entry was grey. Below is the screenshot after I pressed back. (it said “Test completed” but actually nothing happened) 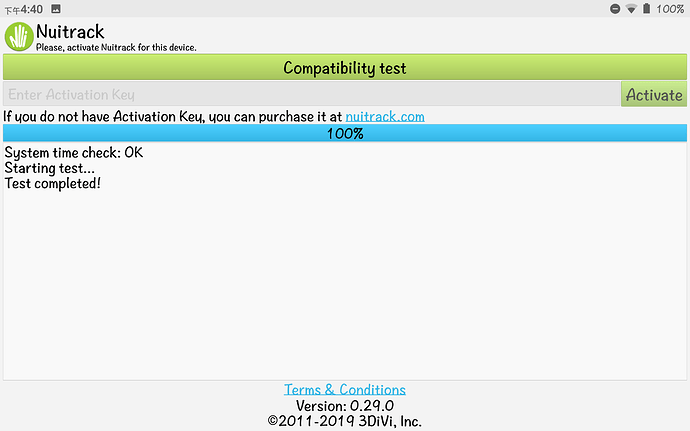 Has anybody got similar problems on Android?

Support for Devices and Platforms

Thanks for the reply.

I have tried to reinstall the apk but it didn’t help. Do you have any other suggestions?

I just went through the logcat and found some error/warning message below:

It seems that there may be something wrong with the permission to internal/external storage and the sensor.

What Orbbec Astra model do you use (Pro, S, regular Astra…)? Please provide us with VID and PID of the sensor. Also please advise did you see a pop-up window asking for permissions after you clicked “Compatibility Test”?

Thanks for the suggestions.

I didn’t see any pop-up windows asking for permissions.

I ran the command you suggested in the adb shell terminal but it didn’t help. I double checked the file repository in root explorer on my Android device and it was set to readable, writable and executable by everyone.

I have also tried to install the Nuitrack.apk on other devices with different Android versions (5, 9, and 10) as well as testing on other Astra Pro sensors but none of them was able to finish the compatibility test, not to mention entering the activation key. In addition, I didn’t see any pop-up windows.

Do you have any other suggestions?

Could you also suggest any type of Android devices that are most compatible with Nuitrack?

By the way, do I have to connect my Android device to my sensor via USB 3.0?