The main reference frame of NuiTrack SDK seems to have an unusual convention.

Z-axis is the opposite of the cross product (X-axis x Y-axis) according to the right-hand rule.

Does it mean that NuiTrack use the left-handed coordinate system? And why?

By default, the origin of coordinates coincides with the position of the depth sensor (given that registration of depth frames and color frames is turned off). Coordinate axes are directed as shown in the image. This system is used by default in the OpenNI framework. 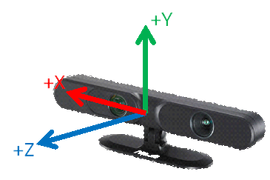