I’m trying to activate the license on Debian Stretch with a small installation and I’m unable to enter the license code after the compatibility test finishes. The test finishes within a second without any errors, the terminal however does show two errors about SSL. The camera itself and Nuitrack work themselves, I can run the demos and my own tech demo for 3 minutes.

I’ve already tried different libssl/crypto versions to resolve the Qssl error issues. Do I need any other libraries installed? 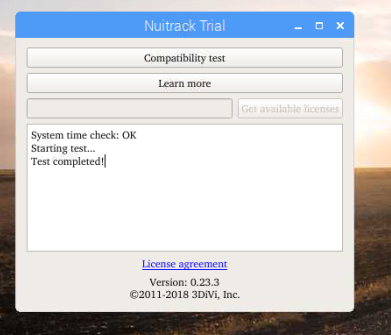 (I can’t post two images, so:)
The terminal says:

I’ve followed the Ubuntu installation instruction.
And the steps for the activation as per “Nuitrack license” e-mail.

Please advise what is your Debian distribution?

We haven’t tested Nuitrack on Debian, however, you can try this workaround solution.

It seems I’ve already executed the steps in the link. Before we downgraded (from 1.1) to libssl1.0-dev we had the same errors as in the link. Afterwards we got the same warnings as the accepted answer. Namely these previously named:

The accepted answer says they’re warnings, not errors. Maybe something else goes awry? Can I find more details/logs?

Can we activate the camera some different way?

What is the architecture of your OS?

Please run the following command and provide us with the console output:

and send us the created “e24b…” file from the folder /usr/etc/nuitrack/data/ (in a private message). After that, we’ll send you the license.json file and you’ll be able to use Nuitrack Pro.

Any solution to this? I am having the same issue on a Raspberry Pi 4 running Raspian Buster

The activation input started working after I made sure these libraries were installed on Debian Buster:

Additionally make sure these are installed for the nuitrack_sample:

I also advice using ‘ldd’ to see any possible missing requirements on Raspbian Buster as it depends which installation you get if it works quickly (e.g.: raspbian lite, default, recommended):

This error, is more like a warning and doesn’t really matter it seems: