Hello, Nuitrack team,
I tried to update my Nuitrack to the latest version on Windows 10.
And noticed I cannot download nuitrack-windows-x64.exe (from here) because Chrome keeps claiming it detects the virus.
I managed to download by disabling Windows defender thing but is it secure to download and those install nuitrack exe?

and one more screenshot. 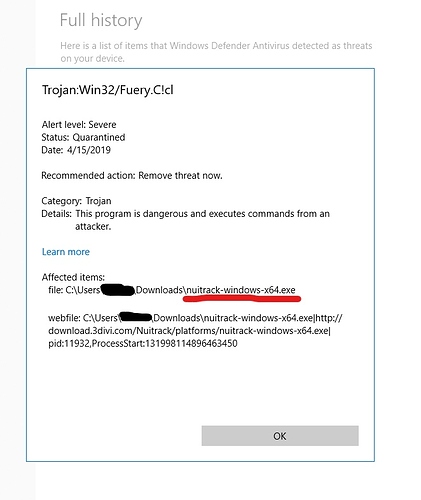 I’ve just downloaded that file Chrome and scanned it with Window Defender… no threats found.

Maybe your system is compromised and infects any executable your download?

It seems that it’s a false positive. We have checked the installer by uploading it to VirusTotal:

low.ml.score is not actual detection. In fact, if a system has no enough samples, it marks file as suspicious, even if no signatures or heuristics point to malware.

@vpenades, @olga.kuzminykh
I will check windows 10 OS itself and try again.
Thank you!