I am using the D415 camera to track users who are sitting in a chair and making some movements mostly with their arms. Most of the tracking goes fine, however sometimes there are poles near the user which are also tracked or the user makes arm movements where the elbow is in a ~160 deg orientation which causes the tracking to degrade significantly. Also the chair sometimes makes it more difficult.

My question is: are there any possibilities to improve tracking? I saw a few topics already on this (Experiment setup for good skeleton tracking and Best settings for nuitrack.config for skeleton and face tracking with Intel D415) and I read the general recommendations for tracking however I was wondering if it is possible to go further using the nuitrack.config file or any other modifications / environmental improvements. For example a threshold to remove the chair’s back (z > user waist + x mm) would be nice.

An example of the arm issue is shown below, don’t mind the arm at the right edge since I was using this to make a print screen. Also when sitting further away the issue remains, ofcourse the other tracking improves. 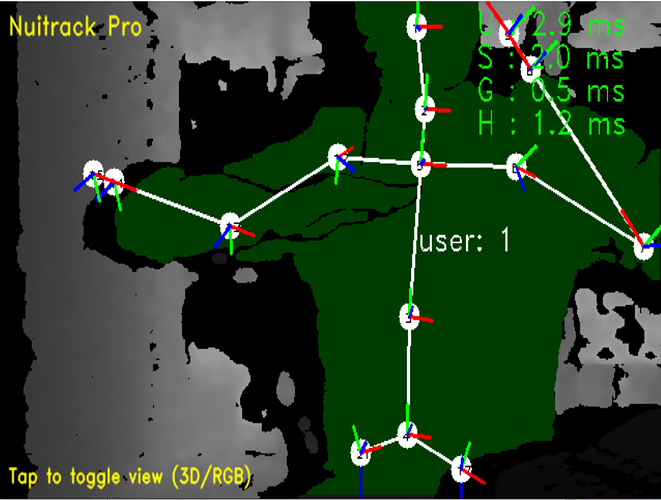 We’re aware of this issue and currently trying to fix it. Besides, we’re working on a new Nuitrack version (NUITRACK AI). In this version, RGBD data will be used for skeleton tracking (currently, only depth data is used), so it’s expected that skeleton tracking will be improved for non-standard cases (such as sitting). Expected time frame for the new version is the first half of 2019.

Thank you for your answer! I’m looking forward to this new version.